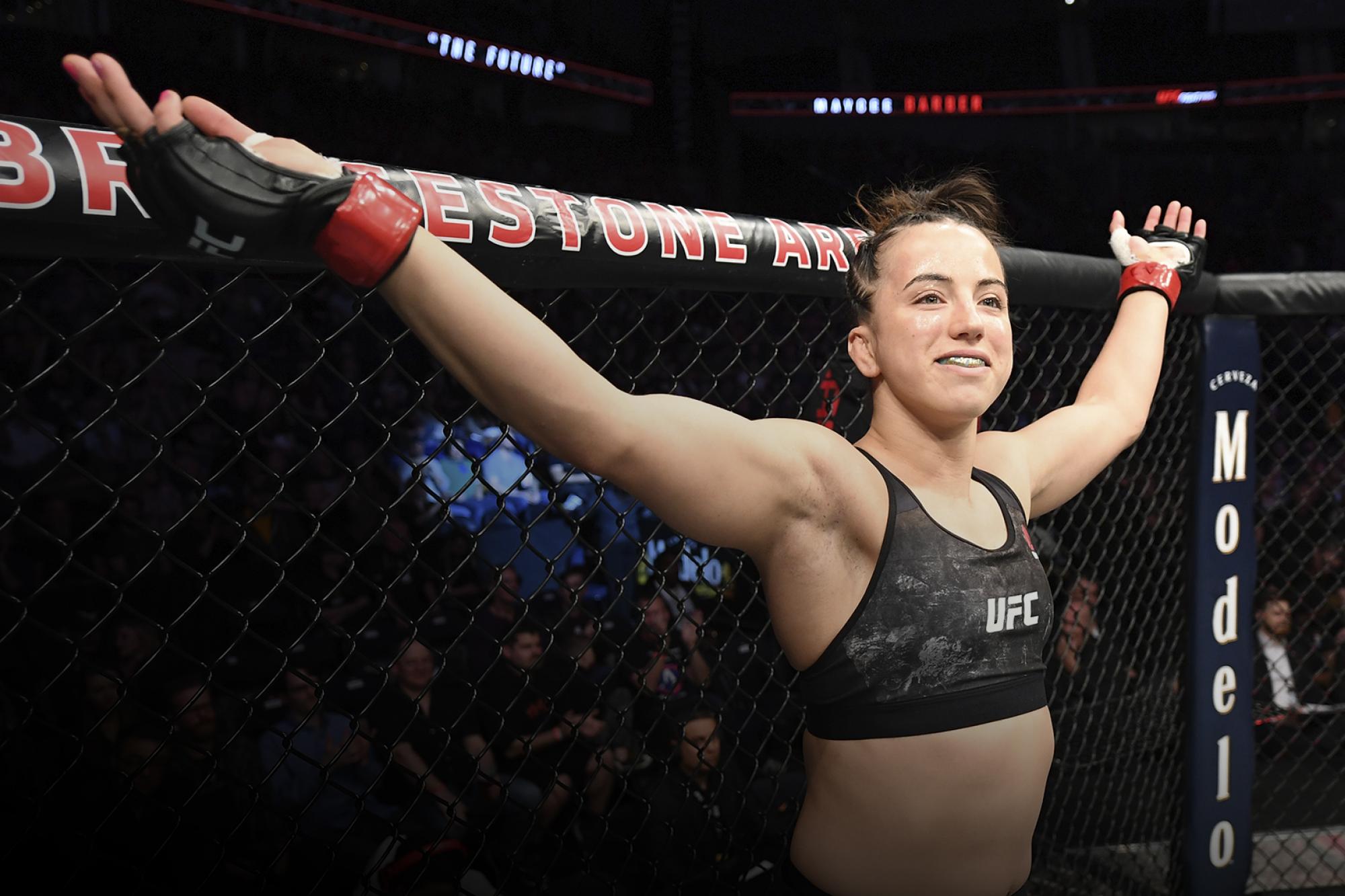 Barber Intends To Make A Statement In Boston

Maycee Barber’s intentions have always been crystal clear. She wants a UFC title, naturally, but she wants the belt around her waist before she turns 24 years old.

That might seem fast, but Barber already has two wins – both via TKO – in the UFC and is still just 21 years old. With that in mind, however, the Colorado native finds herself a little caught off guard as she approaches her third fight.

That said, Barber’s third UFC fight is her toughest yet, as she squares off against another impressive up-and-comer in Gillian Robertson. It’s Barber’s first bout as a ranked fighter, as well as her first against a ranked opponent. The Canadian presents a particular challenge on the mat, as five of her seven wins have come by submission, and her most recent win came by way of a ground-and-pound TKO at UFC 240.

“I think this matchup is good because a lot of people have seen me fight and they don’t believe that I have the ground game,” Barber said. “it’s mainly because I haven’t gone that far into a fight. A lot of them, I’ve either finished standing or we’ve ended up on the ground in a little bit of a scramble, and then I finished it there.”

Barber has a point, and she also has reason to feel that amount of confidence as well. After splitting time in Milwaukee and Colorado before her last fight against JJ Aldrich, Barber made the move to train at Rofusport full-time. She called the decision the “best thing ever” for her career and believes it’s a long-term home. With the move, she also found access to new resources, including learning new skills on the mat with UFC welterweight Ben Askren.

“I feel like I’m in preschool when I’m working with him right now,” Barber said. “I haven’t even scratched the basic surface of the potential that I could have working with him.”

Askren’s bout with Demian Maia in Singapore prevented him from making the trip to Boston with Barber, but the training certainly reinforced that signature confidence in her.

“I haven’t had too much of a matchup (on the ground),” she said. “It could be interesting to see. You shouldn’t underestimate me.”

While preparing for Robertson, Barber has made plenty of noise in her push to fight Paige VanZant. The two have sparred on social media and in dueling interviews. While some might question Barber’s focus with a tough opponent in her sights, Barber doesn’t give that line of thinking much credit.

“Honestly, I don’t know if I’ve really thought about how it’s difficult,” Barber said. “A lot of people are thinking that I’m overlooking Gillian, but really, I’m on social media anyway, and I’m not going to say Gillian is not a big enough name, but we don’t have as big of a following as someone that I’m trying to push for a fight with, so yeah. It is what it is.”

And so Barber’s chase to become the youngest UFC champion continues. Should she keep her unblemished record in Boston and do so in dominant fashion, she could very well stake her claim for a top-10 opponent in a talent-rich, but open, flyweight division. At times, her rise seems fast even to her, but she grounds herself quickly and continues to grind.

“It’s actually pretty surreal, the fact that it’s my third fight,” Barber said. “I feel like it’s still my first fight in the UFC, but how I manage it is just taking it day-to-day and not losing where I’m coming from.”