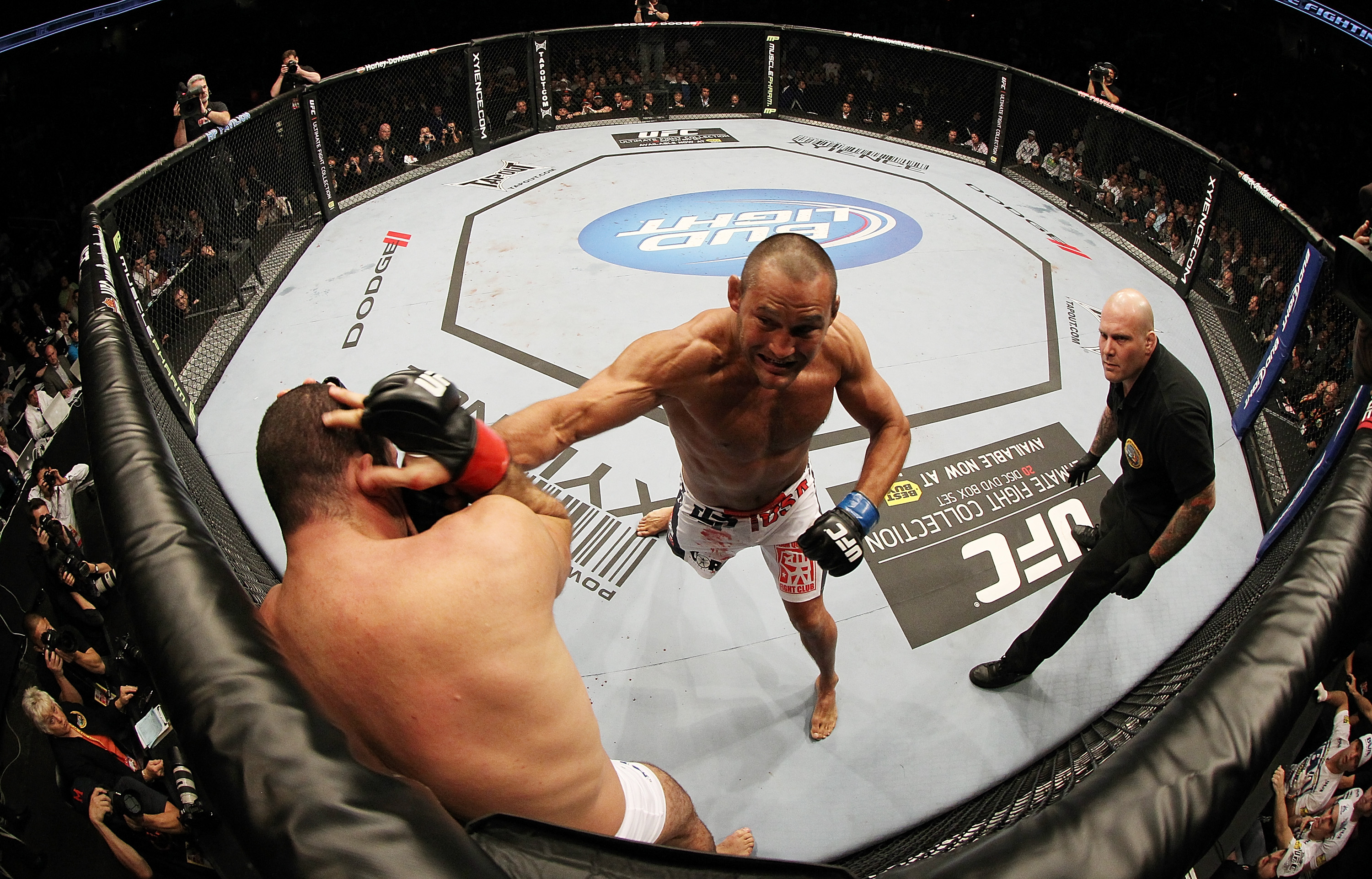 Long established as one of mixed martial arts’ best ever, pound for pound, former PRIDE and Strikeforce champion Dan Henderson will look to finish off his trilogy with Vitor Belfort in victorious fashion on November 7 in Sao Paulo, Brazil. If he pulls off the win in the UFC Fight Night main event, expect to see an addition to the following list of Hendo’s defining moments.

Crezio de Souza – June 15, 1997 – Brazil Open
Result – Henderson TKO1
A 1992 and 1996 United States Olympian in Greco-Roman wrestling, Henderson turned to the budding sport of mixed martial arts after the 1996 Games, and was immediately tossed into the fire in a Vale Tudo event against Carlos Gracie-trained Crezio de Sousa. This wasn’t anything like competing on the mat back at home, but with his wrestling shoes on, Henderson immediately took to MMA, stopping de Souza in 5:25 into their bout. And while the stoppage may have been a bit early, there was little question that Henderson showed enormous potential in his first bout, which was rapidly followed the same night by his second, a guillotine choke-induced knockout of Eric Smith. As for his remembrances of that night, Henderson said with a chuckle, “The first crowds I remember were in Brazil because they were throwing stuff into the cage and they rushed the cage because the ref stopped the fight.”

Carlos Newton – May 15, 1998 – UFC 17 (Watch on UFC FIGHT PASS)
Result – Henderson WDec
Nearly a year after his debut fights in Brazil, Henderson got the call to make his UFC debut in another one night tournament, this one at the Mobile Civic Center in Mobile, Alabama. Also making his debut that night was a pretty fair fighter by the name of Chuck Liddell. But it was Henderson winning the middleweight (later known as the light heavyweight division) tournament with wins over Allan Goes and future UFC welterweight champion Carlos Newton. It was the first glimpse of Hendo for stateside fans, and he didn’t disappoint.

“I was pretty new to the game and really didn’t know what I was doing,” said Henderson, who could have faced Liddell, the tournament’s alternate, if Newton had been injured and unable to compete in the final. “But I still managed to do pretty well. It was with the old owners, so it wasn’t quite as organized and wasn’t marketed very well, so it was a different engine back then.”

That different engine meant that if Henderson was going to make some serious money as an MMA fighter, he would have to go overseas to do it.

Antonio Rodrigo Nogueira – February 26, 2000 – Rings
Result – Henderson W3
“It really doesn’t do me any good,” said Henderson of his early career, “testing my own skills to better my career to fight guys that aren’t top ranked. So right from the get go, I was hoping to fight the top guys.” He got his wish on February 26, 2000 in Tokyo, Japan, when he beat not only future PRIDE and interim UFC heavyweight champion Antonio Rodrigo ‘Minotauro’ Nogueira, but Gilbert Yvel and Renato ‘Babalu’ Sobral – all on the same night and all by decision. The split decision victory over Nogueira was particularly telling, mainly because it was the Brazilian’s first pro defeat, and it also kicked off two more fights with the Nogueira boys – Rodrigo and Rogerio – in PRIDE that saw Henderson get finished for the first two times in his career, both by submission.

Renzo Gracie – March 25, 2001 – PRIDE 13 (Watch on UFC FIGHT PASS)
Result – Henderson KO1
You don’t knock out tough as nails MMA legend Renzo Gracie. It just doesn’t happen. Remember, this is the same guy who would rather have Kazushi Sakuraba break his arm than tap out. But in this PRIDE fight in 2001, Henderson did the deed, becoming the first and only man to KO Gracie, courtesy of a short right uppercut that caught the Brazilian on the chin as he shot for a takedown. The win took on added meaning for Henderson because he was just three months removed from the first loss of his MMA career in an entertaining war against Wanderlei Silva. Some fighters don’t recover from their first loss; Henderson proved by beating Gracie that he was just getting started. And he would settle his business with Silva soon enough…

Wanderlei Silva II – February 24, 2007 – PRIDE 33 (Watch on UFC FIGHT PASS)
Result – Henderson KO3
After beating Gracie, Henderson became a bona fide star in PRIDE, going 11-4 over the next five and a half years. The names on his victims list were impressive: ‘Ninja’ Rua, Murilo Bustamante (twice), Yuki Kondo, Ryo Chonan, Akihiro Gono, Kazuo Misaki, and Vitor Belfort, and he also earned the PRIDE welterweight title (183 pounds) along the way. But when the opportunity came up for him to not only rematch Silva, but to do it in the United States and for the PRIDE middleweight (205 pounds) belt, it was an offer he couldn’t refuse. Given all this motivation, Henderson couldn’t lose, and when he found his opening, he pounced, knocking Silva out not with his trademark right hand, but with a sweeping left hook. Henderson was now the first man in MMA history to hold two PRIDE championship belts simultaneously, and he also showed that he was a much different fighter than the right hand crazy one that fought Silva the first time.

“I’ve always used my wrestling in every fight, but the difference is, I was just trying too hard to knock guys out before,” admits Henderson. “Now, I’m just letting it (knockouts) happen, and I would still like that to happen, but I’m making sure I win every round, whether it’s with my wrestling or striking.”

Quinton Jackson – September 8, 2007 – UFC 75 (Watch on UFC FIGHT PASS)
Result – Jackson W5
After the demise of PRIDE, it was inevitable that Henderson would return to the UFC, the home of the best 205-pound and 185-pound fighters in the world. And on the night of UFC 71 in May of 2007, it was announced that Henderson was returning and would face the winner of that night’s Quinton Jackson-Chuck Liddell light heavyweight title bout. “Quinton’s my friend, Chuck’s my friend, we’re all friends,” said Henderson that night. “But it’s a sport and a business and I’d be happy to make some money with some friends. I’m just happy for the fighters and the fans that we finally get to see who the top guy is.”

Less than four months later, Henderson got to test himself against Jackson, but after five closely contested rounds, it was ‘Rampage’ emerging victorious. It was a solid performance by Henderson, but not one he was particularly happy with, especially considering he had to readjust to life in the Octagon as opposed to the ring.

“I think it made a little bit of difference in that fight, just not being used to the cage as much,” he said. “There were a couple of instances where I tripped over the cage when I was on my feet, and I never had that issue with the ropes. The ropes kinda give with you a little bit and they’re not at your feet. I noticed that during the fight, and I think at one point I had him (Jackson) in a good position and he walked his feet up the cage and got out of a pretty dominant position that I had just gotten. Those are things that I’m more aware of now, things that I really didn’t think about when I was fighting in a ring.”

Rich Franklin – January 17, 2009 – UFC 93 (Watch on UFC FIGHT PASS)
Result – Henderson W3
Henderson quickly got back up to speed in the UFC, putting in a strong first round against Anderson Silva before getting caught and submitted in the second round of their UFC 82 title fight, and then pounding out a unanimous decision win over Brazilian Jiu-Jitsu ace Rousimar Palhares. But it was his January 2009 win over Rich Franklin that was the most important performance of his UFC career to that point, and not just because he got the close split decision. It was because the win earned him a coaching spot alongside Michael Bisping on the ninth season of The Ultimate Fighter that finally put him in a position to be seen by mainstream MMA fans on a weekly basis.

Michael Bisping – July 11, 2009 – UFC 100 (Watch on UFC FIGHT PASS)
Result – Henderson KO2
For those who hadn’t followed Henderson’s long career in PRIDE, his coaching stint on TUF9 was a chance to see the no-nonsense Hendo and get acquainted with him like they never had before. As a bonus, they also had the opportunity to see him fight his opposing coach, Michael Bisping. Bisping had become a polarizing force at that point, so when Hendo’s right hand crashed into his jaw and knocked him out in the second round, it had the effect of making Henderson even more popular. What the fans didn’t know is that it would be his last fight in the Octagon for over two years.

Rafael Cavalcante – March 5, 2011 – Strikeforce: Feijao vs. Henderson (Watch on UFC FIGHT PASS)
Result – Henderson TKO3
Following the win over Bisping, Henderson signed with Strikeforce but got a rude welcome from Jake Shields in his debut, as he was outpointed over five rounds in April of 2010. A knockout of Babalu Sobral in a rematch of their 2000 bout followed, but it was in March of this year that Henderson truly showed what he had left in the tank at 40, as he knocked out “Feijao” Cavalcante to win the Strikeforce light heavyweight belt.

Fedor Emelianenko – July 30, 2011 – Strikeforce: Fedor vs. Henderson (Watch on UFC FIGHT PASS)
Result – Henderson TKO1
This was a dream fight between two of the greatest fighters to step into the PRIDE ring, and for the 4:12 it lasted, it didn’t disappoint, as Henderson tasted Fedor’s thunder, only to roar back and finish off the Russian standout with his own brand and fight-finishing power. It was the perfect way for Hendo to finish out his run in Strikeforce, and a fitting segue for his return to the UFC Octagon.

Mauricio “Shogun” Rua – November 19, 2011 – UFC 139 (Watch on UFC FIGHT PASS)
Result – Henderson W5
When asked if he ever thought he was going to go back to the UFC after leaving the organization for a stint in Strikeforce, Henderson said, “When I left the UFC and went to Strikeforce, I didn’t know what was in the future. It was always a possibility; I knew the UFC wasn’t going anywhere and I know I didn’t leave on bad terms at all, so it was a matter of how things worked out at Strikeforce. And (UFC President) Dana (White) missed me so much he had to go buy Strikeforce.”

In 2011, Henderson did return, and his first fight back would be another dream fight with a former PRIDE colleague, this one Mauricio “Shogun” Rua. And while Henderson-Emelianenko was exciting and memorable for its brief burst of explosive action, Henderson-Rua delivered five rounds of back and forth fury that many believe earned it the title of greatest MMA fight of all-time. When it was over, Henderson got the win and a title shot against Jon Jones, but a knee injury took him out of the September 1, 2012 fight at UFC 151, an event that wound up being cancelled.

Mauricio “Shogun” Rua II – March 23, 2014 (Watch on UFC FIGHT PASS)
Result – Henderson TKO3
The knee injury that took Henderson out of the Jones fight kept him on the sidelines until February of 2013, and when the Californian did return, his four-fight winning streak turned into a three-fight skid that saw him lose to Lyoto Machida, Rashad Evans and Vitor Belfort. But in March of 2014, Hendo got back in the win column, fitting against the man who pushed him to his greatest heights – Shogun Rua. It wasn’t a smooth start for Henderson in the rematch, but the H-Bomb hit in round three, and that was all she wrote for Rua. It wasn’t up to the drama of their first bout, but it was still a memorable clash that earned the pair Fight of the Night honors.