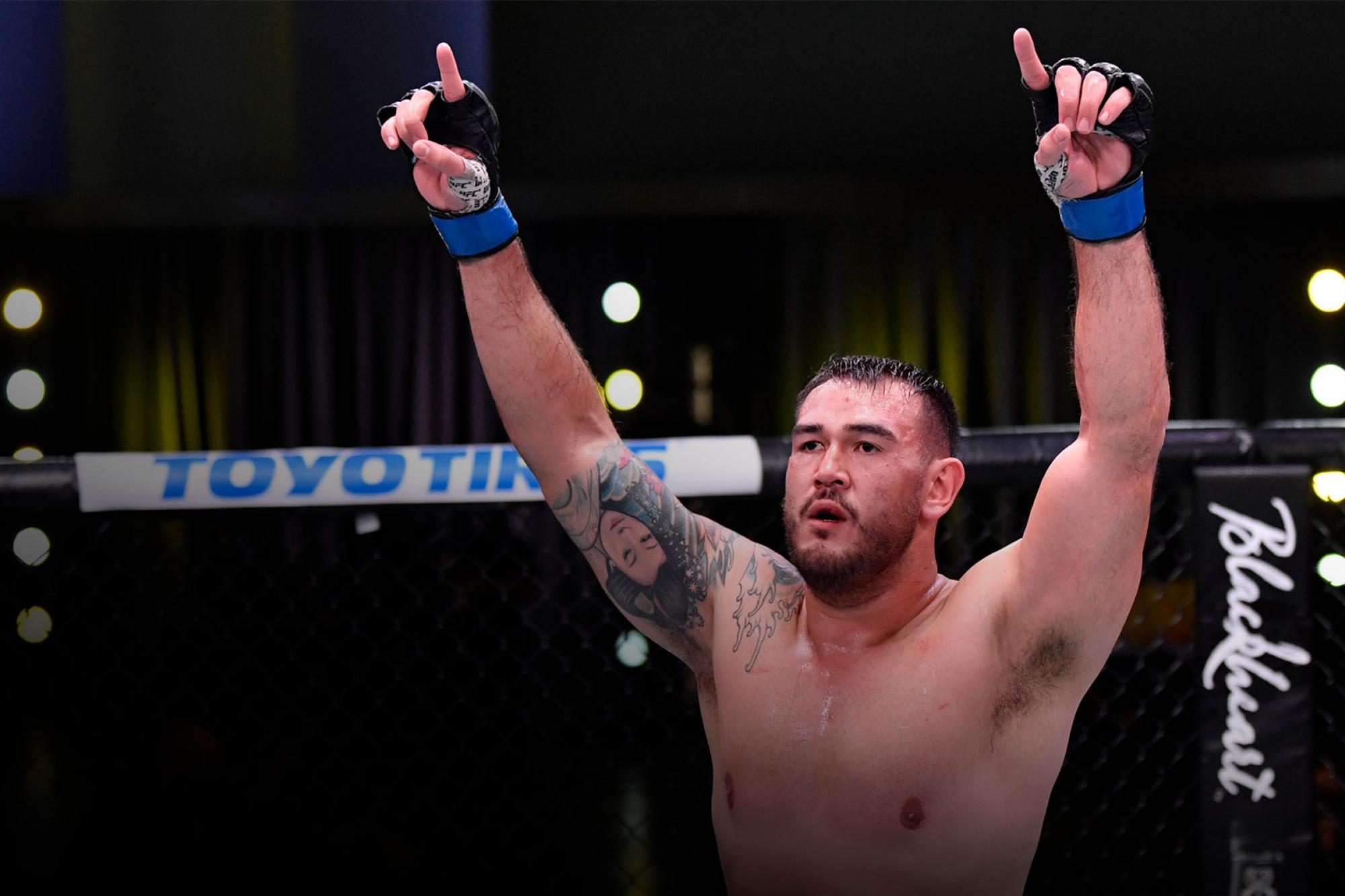 Fighters On the Rise: September 5 Edition

Take a closer look at three fighters poised to emerge ahead of their bouts on September 5's Fight Night
By E. Spencer Kyte, on Twitter @SpencerKyte • Aug. 31, 2020

The turning of the calendar from August to September brings us to my favorite time of year, both in terms of seasons and action inside the Octagon.

Fall is the absolute best, with its cool mornings, warm evenings, beautiful sunsets, leaves changing colors, and a culinary shift towards comfort foods and Sunday roasts. In the UFC, the shift to the autumn months means we’re on the final bend before hitting the home stretch, which often comes with divisional races getting greater clarity, conversations about year-end awards starting to take shape, and a bevy of action that helps everyone get over the fact that summer has passed and winter is coming.

This month’s collection of events begins with a card headlined by an intriguing heavyweight clash between seasoned veteran and perennial contender Alistair Overeem and streaking Brazilian Augusto Sakai, who enters with a 4-0 record inside the Octagon and riding a six-fight winning streak overall as he looks to take another step towards title contention in easily his highest profile pairing to date.

But while the further clarifying of how things line up in the heavyweight ranks that comes with the main event is definitely compelling, this week’s fight card also affords fans a chance to familiarize themselves with a number of talented fighters who have thus far been operating a little bit under the radar in their respective divisions, but who deserve greater attention.

Here’s a closer look at three of those athletes.

This is the September 5 edition of On the Rise.

As mentioned above, Sakai is 4-0 in the UFC, which ties him with Francis Ngannou and Curtis Blaydes for the longest active winning streak in the division. While those other two men have faced superior competition and are closer to title contention, the Brazilian’s accomplishments should not be overlooked, as he’s climbed the competitive ladder with each successive victory. After making quick work of Marcin Tybura last fall in Vancouver, Sakai landed on the happy side of a split decision verdict last time out against Blagoy Ivanov, maintaining his current pattern of following up each UFC finish with a split decision win.

If the pattern holds, he’s on track to stop Overeem on Saturday night, which would surely force more people to start paying closer attention to the streaking 29-year-old big man.

Other heavyweights have made a greater splash and had faster ascents up the rankings in recent years, including Jairzinho Rozenstruik last year, which has obscured Sakai’s slow-and-steady progress, but while “Bigi Boy” burst out of the gate and has since settled into place in the Top 10, the first time headliner has just been chipping away, alternating between flashing devastating potential and grinding out tough victories, both of which are crucial pieces to becoming a legitimate title challenger.

There is nothing flashy about the soft-spoken Sakai, but his results thus far speak volumes about his talents, and if he can maintain his winning ways through this weekend, he’ll become someone a lot more people are talking about going forward. 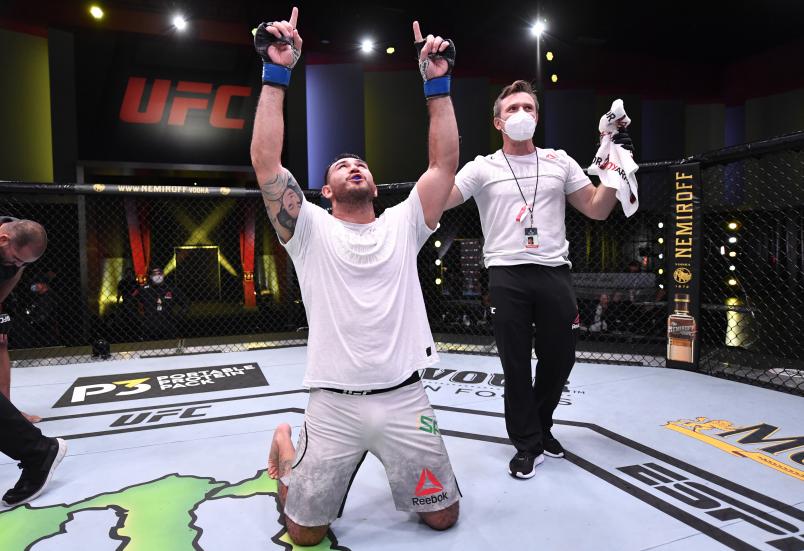 LAS VEGAS, NEVADA - MAY 30: Augusto Sakai of Brazil celebrates after his split-decision victory over Blagoy Ivanov of Bulgaria in their heavyweight fight during the UFC Fight Night event at UFC APEX on May 30, 2020 in Las Vegas, Nevada. (Photo by Jeff Bot
Alexandr Romanov

I’m a simple man with simple tastes and when it comes to heavyweight new arrivals, it doesn’t take all that much to get me interested; just give me a big dude that swings hammers and I’m definitely going to tune in to get a closer look.

But when you mix in an unbeaten record, a 100-percent finishing rate, and a “foundational style” listed as sumo, your debut becomes legitimate appointment viewing for me.

Welcome to the UFC, Alexandr Romanov; now show me what you’ve got.

The 29-year-old from Moldova is 11-0 with nine of those stoppage victories coming in the opening round. There is one familiar name on Romanov’s roll call of vanquished opponents — former Strikeforce competitor Virgil Zwicker, whom he dispatched in 76 seconds a little over two years ago. On one hand, Zwicker is the kind of seasoned veteran who could, in theory, make a glorified novice look bad, but on the other hand, ahe lso went 2-4 over his final six fights, with the loss to Romanov coming in the middle of a three-fight slide, so one could argue his days of upsetting prospects were already behind him.

But that’s what makes Romanov’s debut this weekend against Marcos Rogerio de Lima so intriguing: the Brazilian has loads of experience and an established reputation in the UFC, so how their fight plays out will provide an excellent early indication of where the newcomer fits in the heavyweight division.

Thiago Moises is a 25-year-old Brazilian with a 2-2 record in the UFC, but it’s what doesn’t show up when you just state his record that makes him an intriguing competitor to track as he heads into this weekend’s matchup with Jalin Turner, who is also 2-2 in the UFC and someone you should be keeping tabs on as well.

Moises earned his place in the UFC with a victory on the Contender Series in the summer of 2018, then walked into the Octagon to face Beneil Dariush in his debut. Dariush won by unanimous decision, kicking off a five-fight winning streak that has returned him to the Top 15 and re-established him as a dangerous contender in the lightweight division.

Moises responded by outworking Kurt Holobaugh, but then dropped a decision to Damir Ismagulov, a seasoned Soviet protege of Alexander Shlemenko who has 19 wins in 20 professional appearances and extended his winning streak to 14 by defeating Moises.

But last time out, the Brazilian showed why he is one to pay attention to going forward as he rebounded from a rocky first round against Michael Johnson by catching the former lightweight contender in a nasty heel hook just 25 seconds into the second round. The slick submission landed at No. 4 in our staff-wide mid-year awards, and a case could be made for it deserving a place on the podium. If he can get the best of Turner, who is coming off a second-round stoppage win over Joshua Culibao in February, Moises will carry a little momentum into the final three months of the year and hopefully start to be recognized as a name to watch out for in the 155-pound ranks.