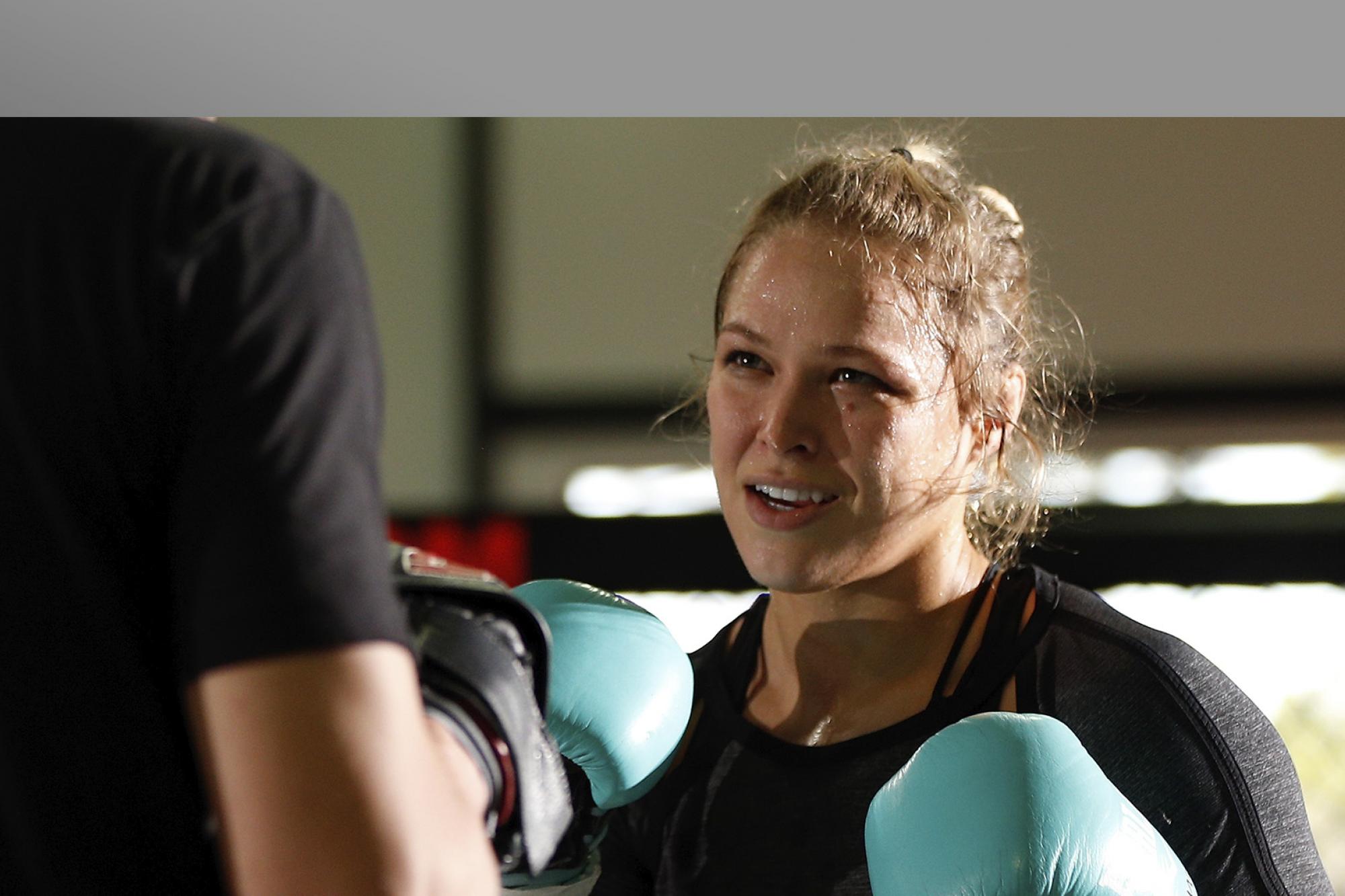 Take a look at what Ronda Rousey had to say before she ever made the walk to the Octagon.
By Thomas Gerbasi, on Twitter: @TGerbasi • May. 22, 2020

Seven years ago, Ronda Rousey started a revolution in the UFC. Along with Liz Carmouche, the two bantamweights became the first women to compete in the Octagon, changing the sport forever. Now Rousey had already received plenty of attention thanks to her stints in the Olympics and Strikeforce, but before UFC 157 on February 23, 2013, all eyes were on “Rowdy” Ronda. Here’s a look back at where she was at before this historic event.

After spending much of her life with a tunnel vision reserved for judo, particularly an Olympic berth in the sport, Ronda Rousey never really had time to consider or even be a fan of any other sports. At least until one of her longtime friends, Manny Gamburyan, made it to The Ultimate Fighter in 2007.

“The first time I watched a UFC fight was when Manny Gamburyan was in the final of The Ultimate Fighter against Nate Diaz,” said Rousey. “I’ve known Manny since I was a little kid, and I was training for the Olympics in Boston. I had been trying to keep up with the episodes, but training was nuts. So when I heard he was in the finals, I said I’m going to watch this fight, and I was jumping all around. I literally jumped up and ran the length of the sectional couch I was sitting on like ten times, running back and forth and screaming. (Laughs) That never happened to me watching any sport ever.”

Little did she know that less than six years later, she would have her Olympic medal, and not just follow Gamburyan into mixed martial arts, but that she would become the UFC’s first female fighter and its first female champion. Looking back now, Rousey admits that she thought of possibly competing in MMA before her Bronze medal winning performance in Beijing in 2008, but figured it wasn’t something that was a realistic notion.

“I was thinking of doing it before the last Olympics and when I was doing judo, but I wouldn’t say anything about it,” she said. “I thought it was an unrealistic thing to hope for. And then after I quit judo, I kinda realized that I really didn’t have that many options. And I was grappling just to keep in shape with some of the guys I trained with before, and they would always say ‘oh man, you would kill these girls,’ and it just started entering into my head again as a real possibility. I said why don’t I give this a try? If it doesn’t work out, I’ll just go join the Coast Guard.” 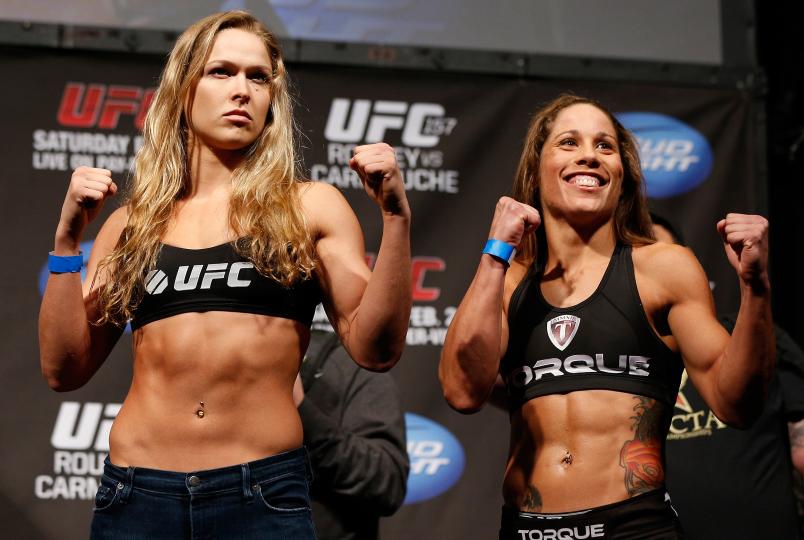 Opponents Ronda Rousey and Liz Carmouche pose for photos during the UFC 157 weigh-in at Honda Center on February 22, 2013 in Anaheim, California. (Photo by Josh Hedges/Zuffa LLC via Getty Images)

She laughs, but unlike what many would assume, winning an Olympic medal doesn’t guarantee you anything once the cheers have died down. For Rousey, there was no pot of gold at the end of the rainbow, and it makes you think of Cuban Olympic Gold medal winning boxer Joel Casamayor, who received a bike for winning his medal. He sold it so his family could eat.

So Rousey, for all the photo shoots and media exposure these days, didn’t get handed anything on the way to her first title defense this Saturday night in Anaheim against Liz Carmouche. That doesn’t mean there won’t be little jabs and ignorant comments along the way, like the one she received during the lead-up to the UFC 157 main event.

“There was one interview where a guy said that I don’t act like a lady,” said Rousey, who proceeded to point out that due to a certain body part, she was more of an authority to speak on what a lady really is than her interviewer was. That pretty much shut down that line of questioning.

“I doubt that will ever show up anywhere,” she laughs. It’s the laugh of an athlete who passed right by the rising star designation and into full-fledged stardom in the space of a few well-placed armbars. Rousey’s ascension was unlike anything seen in MMA in a long time, if ever, and no one was more surprised than the fighter herself.

She shouldn’t be. After a lengthy lead-up to the fight, Rousey dazzled against the then-Strikeforce bantamweight champion, submitting the gutsy Tate with an armbar that was hard to watch for its brutal finality. And by the time Rousey left Columbus, Ohio in March 2012, a star was born, and everyone wanted to talk to and learn about “Rowdy” Ronda.

That type of demand can do a couple things. It can make a fighter start to believe her press clippings, it can make her neglect the hard work that got her there, or in Rousey’s case, it could force her to schedule, prioritize, and deal with life in the spotlight while still finding the time to hit the gym just as hard, if not harder, than before. 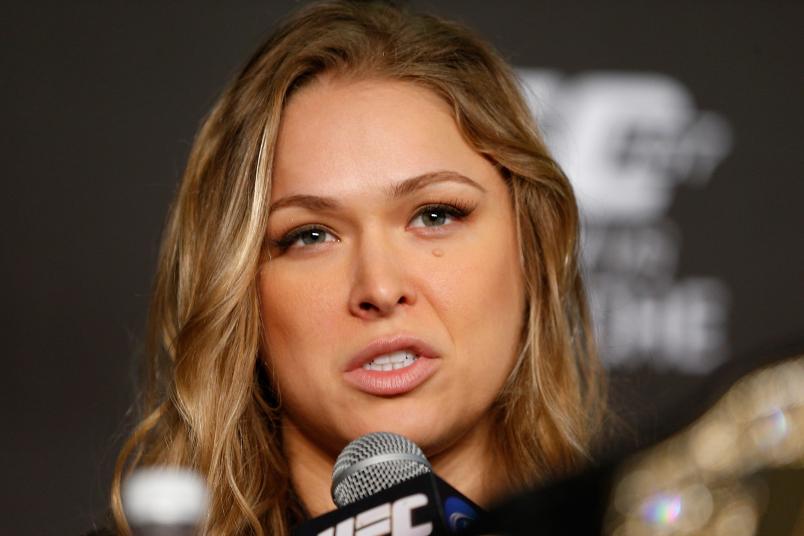 “There was no real break between the follow-up media craze after the Miesha fight and the build-up media craze for the (Sarah) Kaufman fight, and that’s when I just started to really accept that there’s no off-season anymore,” she said. “It used to be that I had time to myself in between and then I would take off, and things would calm down and then pick up. But when there was really no break between those two fights, I just realized that the media craze wasn’t something that came in phases. It was just the way it was from now on.”

Rousey defeated Kaufman in less than a minute by, you guessed it, armbar, in August of last year, and with the eventual demise of Strikeforce, the biggest star in women’s MMA got brought to the UFC to become the first lady of the Octagon. It was a career-making turn for the 26-year-old from Venice, California, but one that came with a price tag, as Rousey was now the face of the sport.

“I definitely have to think a lot more and I kind of learned my lesson the hard way when I first got started,” said Rousey, who rapidly became one of the most quotable athletes in the world.  “It was fun and I was just like ‘hey, I can do whatever the hell I want because I’m not playing Miss America Olympian anymore.’ And it was really fun in the beginning, and then as more and more attention started to accumulate, every single thing started to be dissected, so I had to start paying attention to not only what I was saying, but how anything that I said could be portrayed if it was taken out of context. So I definitely have to be much much more careful now.”

Her personality still shines through though, and she seems to be taking the whole role model / ambassador for the sport thing in stride, even if there’s still work to be done in educating the mainstream about women’s MMA. 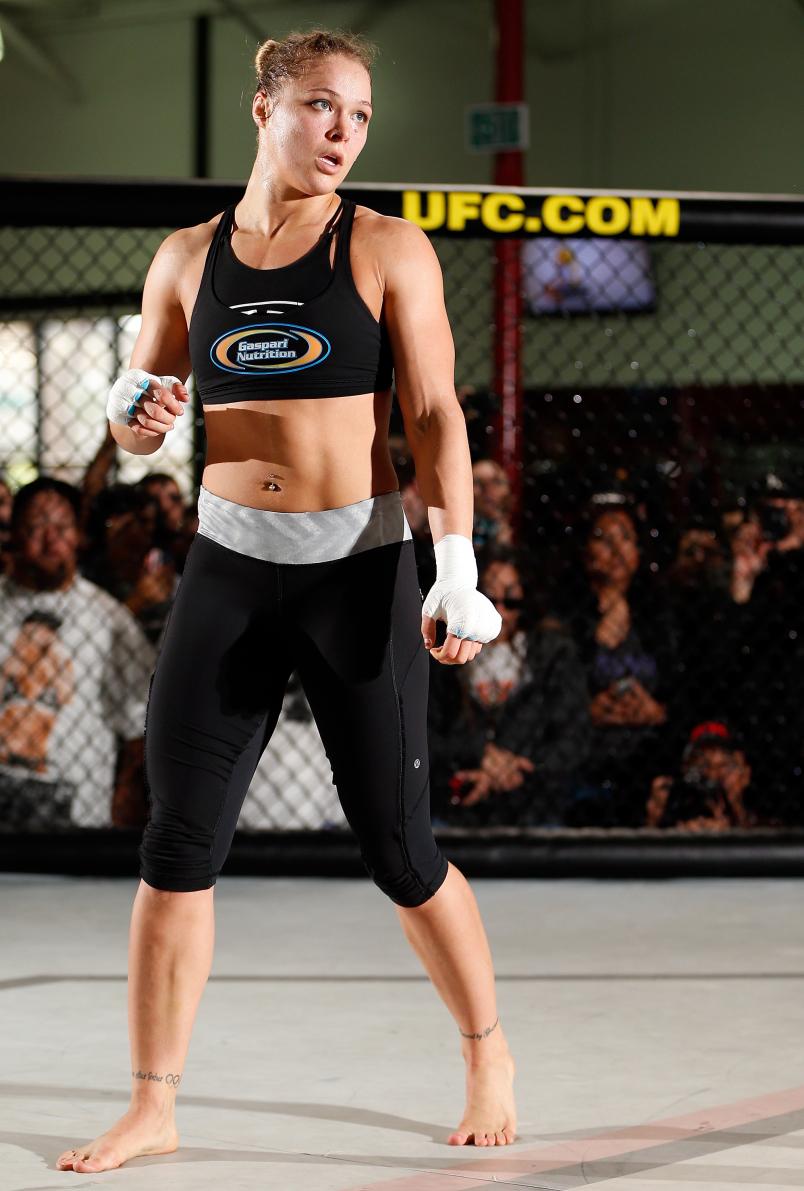 “When I have to deal with media that hasn’t covered MMA before, there’s a lot of new interest in the sport now because of the first women’s fight,” she said. “And in those instances, I feel like I’m really representing the sport. I know they try to get me to say things like ‘I like hurting people,’ and things that are stereotypical ideas of what MMA is, and I try very much to steer the conversation away from that, and try to explain how beautiful a sport this is. It’s not some barbaric spectacle, it really is an art, and that’s why the word ‘art’ is in it.

“So a lot of progress has been made, but there’s still a lot of progress left to make,” Rousey continues. “I know that we don’t live in a Utopian society where everyone is treated equally. People are a lot more tolerant than they used to be, but they’re not as tolerant as they should be. And so I’m not surprised that we still have progress to make, but it gives me goals to get after.”

The next set? Entering the Octagon for the first time, beating Liz Carmouche, and walking away with her championship belt intact. That’s a lot to digest for one night, and for someone who has earned an Olympic medal, you have to wonder how it will compare. For one of the rare times, Ronda Rousey really doesn’t have an answer.

“I don’t know,” she said. “I had no idea what winning an Olympic medal would feel like until after it happened. I thought because it wasn’t gold that I would still walk off the mat angry and I didn’t know I would be as elated as I was. So I don’t know, you’ll have to ask me after.”