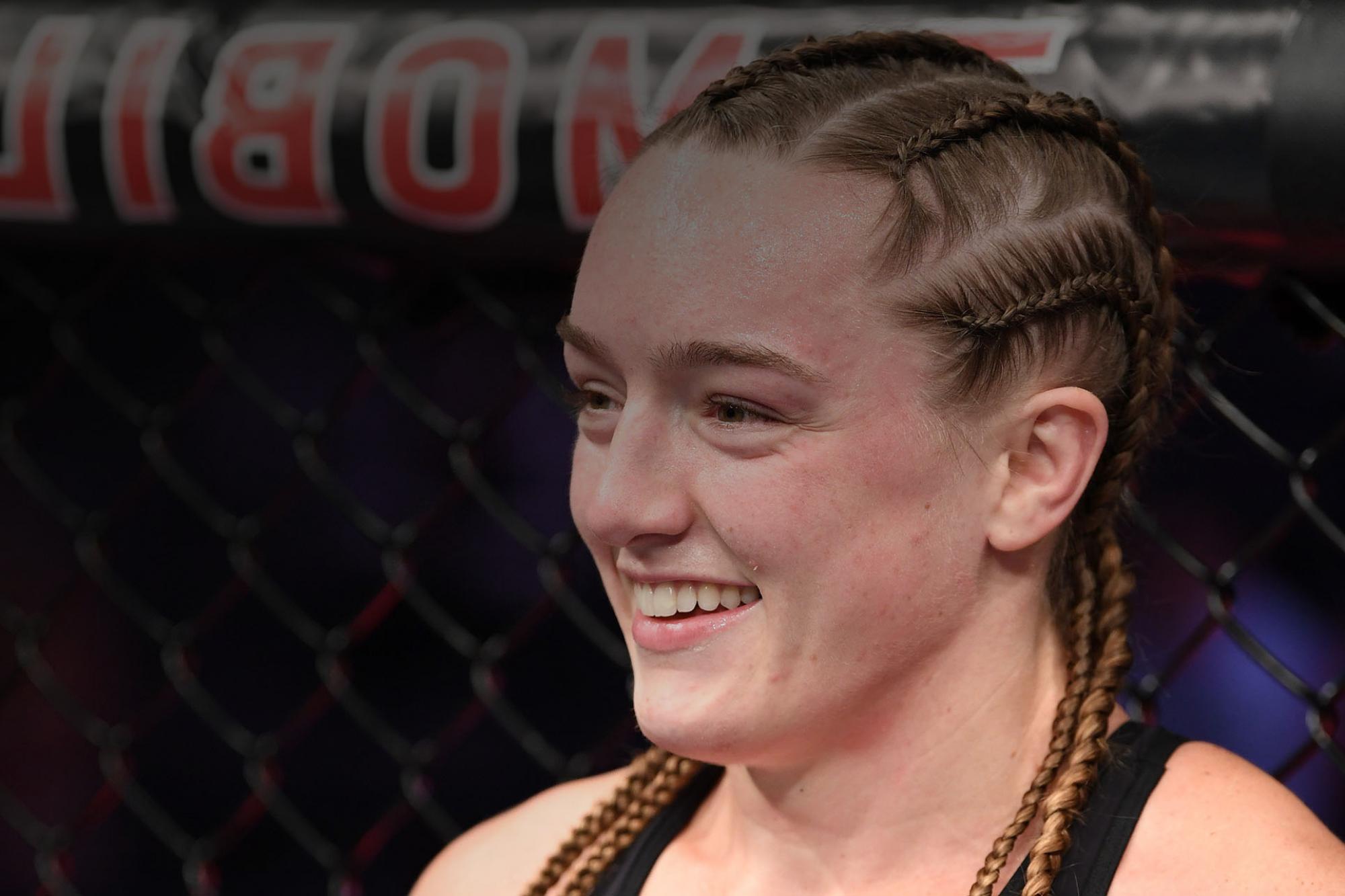 Ladd Is At Her Best When She's Challenged

Nobody could really blame Aspen Ladd for not picking up her phone.

Fresh off a taxing, Fight of the Night-earning decision win, Ladd was in the midst of some well-earned relaxation: a hike with spotty cell phone reception. When she realized she missed several calls from her coaches and manager, she worried something was wrong.

Instead, it was an offer to headline UFC’s upcoming card in Sacramento against No. 1 bantamweight contender Germaine de Randamie. Sure, Ladd might have liked some more time to decompress after going three hard rounds with Sijara Eubanks at UFC Rochester, but she knew the opportunity was exactly the kind she couldn’t let pass.

“As a fighter, none of us are really at our best unless we have a fight,“ Ladd said. “It gives you purpose. It gives you something to do, so I was not feeling that drive yet, like, ‘Oh we need to ask for a fight, we need to get a fight,’ so when I get that call, it was exciting. It was like, ‘Whoa, are you serious? This soon?’ But at the same time, it’s completion. I’m doing what I’m supposed to be doing.”

So far, doing what she’s supposed to has earned her an undefeated 8-0 record, back-to-back performance bonuses and a spot near the top of the rankings. It’s all the more impressive considering she is 24 years old.

Though her career has plenty of quick-moving momentum behind it, she’s cautious to take too much pride in what she’s accomplished thus far.

“Every time you win, things get harder,” Ladd said. “You have more to do, more to accomplish and harder opponents, so you shouldn’t really reflect on your past things. Obviously, you know what you’ve done.”

She is looking forward, though, to her fight with de Randamie, the inaugural UFC women’s featherweight champion. The Dutch kickboxer believes her experience gives her a significant edge over the up-and-coming Ladd, and while Ladd respects her and calls her a “phenomenal standup striker,” she also thinks it’s a mistake to look too much into the difference in Octagon time.

“As far as looking down or not taking someone seriously based on the number of fights they have or who they’ve fought or where they’re coming from, you shouldn’t ever do that,” Ladd said. “It could be Joe Schmo off the street. I’m fighting that person. That’s the next-most dangerous person.”

While Ladd is confident in herself, she does admit to getting pretty nervous as she walks to the Octagon, which she says is the “most nerve-wracking thing” about the fight.

It’s not based in self-doubt, but the natural butterflies that accompany the tangible possibility of failure.

“Anybody with a particular job, I don’t care if it’s in business or whatever it is, if you’re about to do something very important, you’re going to fear failure,” she said. “You’re not necessarily going to fear your task, what you’re doing. You have confidence in yourself, and you know how to do it, you know how to accomplish it, but it’s just the fear of failing at that thing you’re trying so hard to do.”

Once she touches gloves and the fight begins, though, all that fades away. She believes if that holds true past July 13, she could stare at a title shot in the near future. However, she does acknowledge the fact that the division is in a “very strange spot” because the champion, Amanda Nunes, has two divisions to reign over simultaneously.

Before Ladd gets there, she knows she has a tough battle ahead, as well as her first main event bout in the UFC. Only two of Ladd’s eight fights have gone to the judges’ scorecards, and it remains to be seen how she handles potential fourth and fifth rounds. To be fair, de Randamie has only gone past 15 minutes once, when she took home the featherweight belt against Holly Holm.

Regardless, Ladd jokes that she would like to take some time off to relax and travel after fighting twice in the span of eight weeks, but if the circumstances are right, she knows there’s business to handle.

“It’d be like this: I don’t necessarily want that call to come, but if it was to come, and it was another great opportunity similar to this one, like, ‘Hey, do you want to headline this?’ Yeah, you can’t pass that up,” she said.