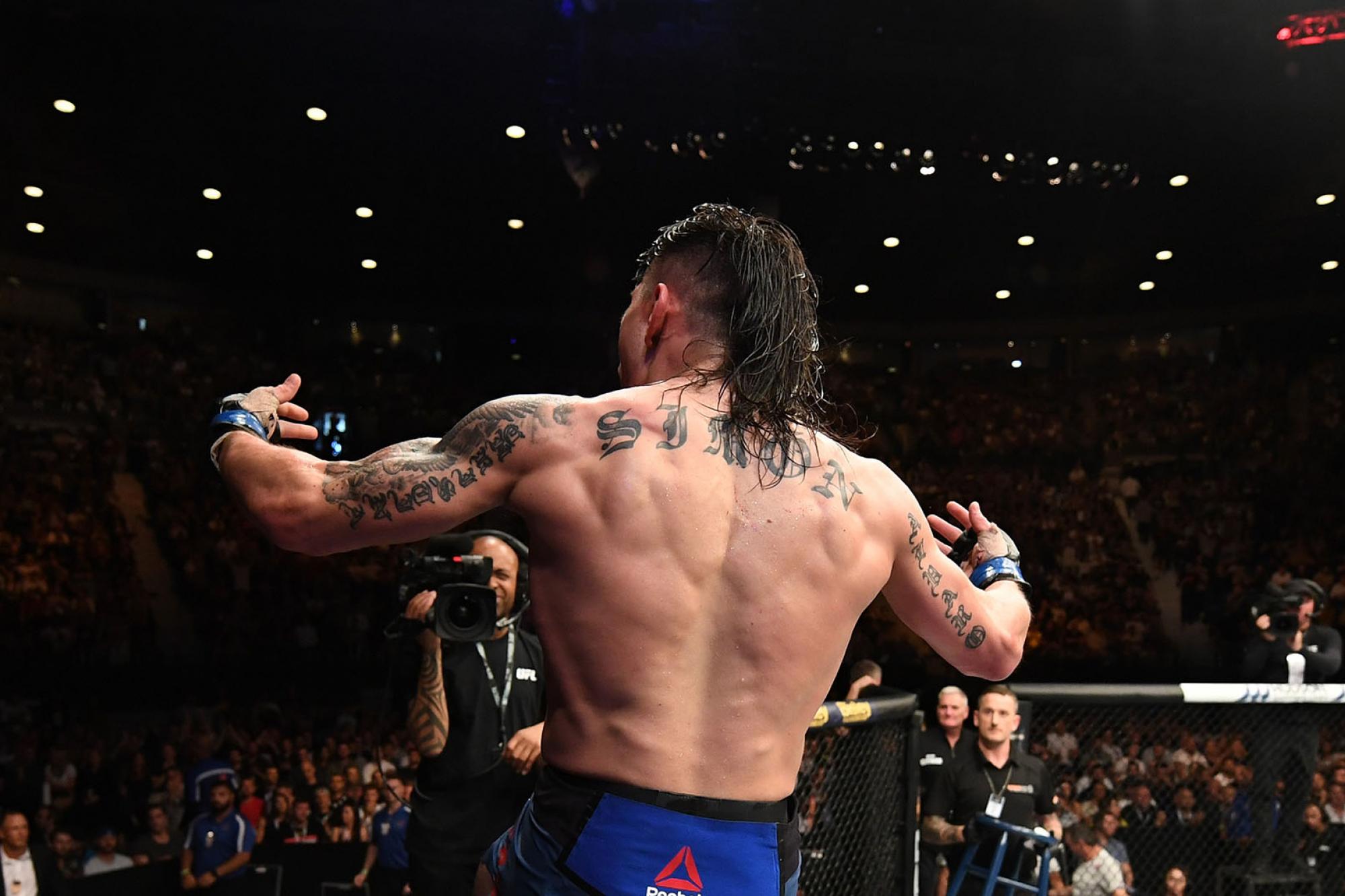 “I was supposed to be drinking a margarita in Cabo right now, but yeah, no honeymoon for me.”
By Thomas Gerbasi • Jul. 8, 2019

As Ricky Simon gets ready for the biggest fight of his MMA career this weekend against Urijah Faber, he can briefly muse about what might have been.

“I was supposed to be drinking a margarita in Cabo right now, but yeah, no honeymoon for me.”

Simon laughs, knowing that, sometimes, work comes before play, especially when the opportunity to fight a UFC Hall of Famer in a co-main event is on the table. But Simon is a married man as of June 28, so when he got the call before his wedding about fighting the comebacking “California Kid,” the next call was to his soon-to-be wife, Jade.

“It was a big decision because it’s not easy being a fiancée of a fighter or in a relationship with a fighter because schedules are crazy,” Simon said. “I called her right away, and she’s like, ‘Who is it against?’ And I told her and she said, ‘All right, I’m canceling everything right now.’ So it was a pretty easy decision.” 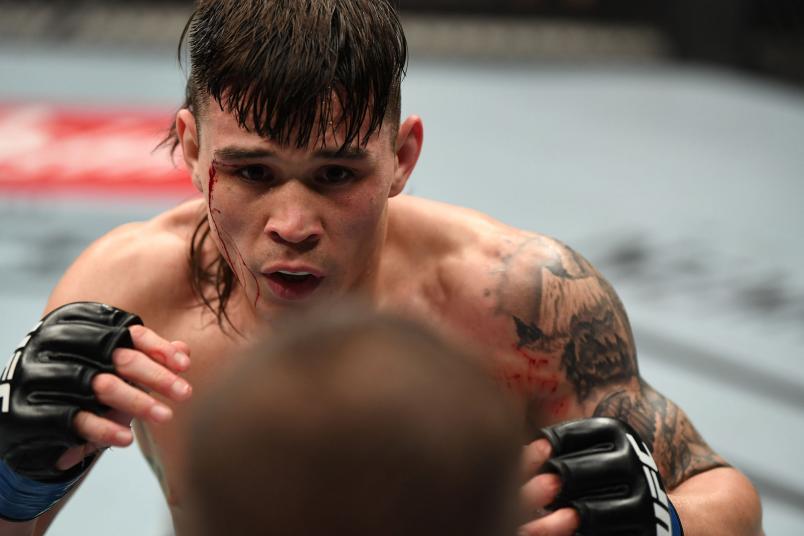 More UFC Sacramento: On The Rise | Josh Emmett At Home

Clearly, the new Mrs. Simon is a keeper, but I have to ask, if Simon was going to fight some UFC newcomer or an unranked foe, would that have been a deal breaker?

“I asked her what would have been the line there, and she said a ranked opponent,” said Simon. “She loves fighting too and she watches all the fights. So it had to be a ranked opponent or somebody like this. If it was a Benito Lopez or something like that…”

The bantamweight up and comer can’t even finish his thought without breaking into laughter as he gets off a jab against his fellow 135-pound prospect, who will be on Saturday’s card against Simon’s cousin, Vince Morales.

“He (Lopez) thought he was dodging me, but now he’s gonna have his hands full with my cousin Vince Morales,” said Simon. “I’m really excited about that one. I give Benito a lot of crap just because we have issues, but that kid’s nice. He has a lot of skill and they’re gonna put on a great fight.” 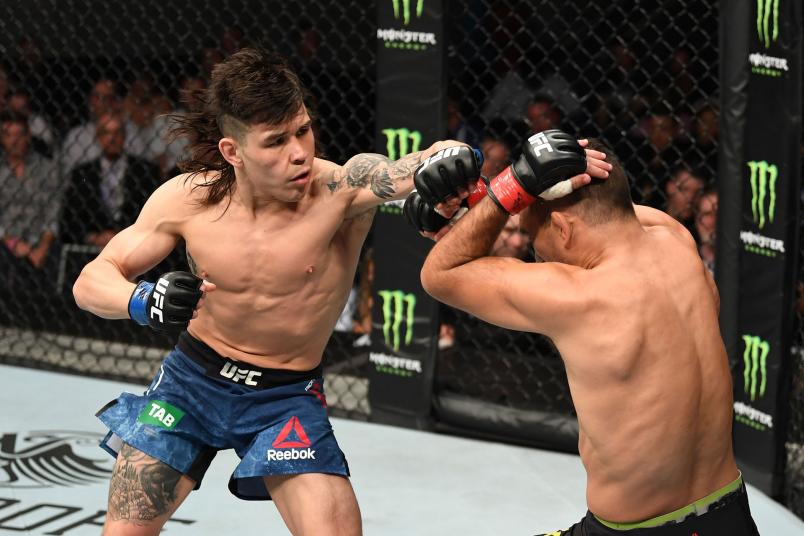 Watch UFC Sacramento This Saturday on ESPN+ | Sign Up Now!

With that out of the way, it’s back to this weekend’s meeting with Faber, who will be back in action for the first time since he retired after a win over Brad Pickett in 2016. “The California Kid” hasn’t been out of the spotlight over the last couple years, so it wasn’t too much of a surprise when he announced his return. But the fact that he accepted a fight with a hungry rising star like Simon did raise a few eyebrows.

“I heard some rumblings that he wanted to come out of retirement, and I threw my name in the hat by speaking up on Instagram and Twitter,” said Simon. “But I was pretty surprised when they gave me the call because it is a Hall of Famer and I would think Urijah Faber would come back against another veteran or someone with a bigger name, but this is gonna be a tough fight for him and I respect that he’s coming back and is up for the challenge.”

That respect is amped up even more by Faber’s willingness to battle Simon and not an “easier” foe.

“You get these guys, and especially in our sport, that like to pick and choose, and I feel like he’s out to prove that he still has what it takes,” Simon said. “He must still see something in himself to where he thinks he can compete with the best. So I definitely respect that, but once that door locks, all that respect’s going out the window and I’m gonna try and knock him out.”

A win for Simon would be the defining one in a career that is already progressing at a nice clip. The 26-year-old from Vancouver is 15-1 as a pro with three Octagon wins without a loss, but a name like Faber is a lot different than those of Merab Dvalishvili, Montel Jackson and Rani Yahya at the moment in terms of public perception, and Simon knows it.

“I believe he (Faber) was ranked seventh when he fought Brad Pickett before he retired,” said Simon. “I was in the rankings and got pushed out because there’s so much activity in our weight class, but what I really think this fight is gonna do is push my name, and that’s what I need. I feel like I’ve been beating the prospects, beating the vets, but I’m still not as well known as I feel I should be. So I feel like that’s where this fight is really gonna help me. It’s gonna push me into being a household name.”

That makes even going into Faber’s backyard to fight a no-brainer. And Simon isn’t just bringing his cousin with him.

“It’s in Sacramento so it’s definitely home court advantage for him, but we’ve got flocks and flocks of people coming out,” he said. “I think at least a hundred people are messaging me, saying they’re coming to the fight, so I’m definitely not gonna hear just boos and silence when I’m walking out.”

That’s got to be a trip, having friends, family and even strangers willing to reach into their pockets to make the trip to Sacramento to support him. Simon agrees, and he appreciates it, but the best way to show that appreciation is to give his people a win.

“This means everything to me, especially considering where I come from,” he said. “We didn’t come from a place where we could do stuff like that. And with my family, it means a lot that they’re getting out more and they’re in a spot where they can travel a little bit more and make these events, so the support is insane. I feel like I’m just a normal guy, and all these people are coming out to watch me in a co-main event. It’s just surreal. Everyone’s excited to see their boy from Washington go into Cali and beat the Cali Kid.”

“Then we’re off,” he said of his delayed honeymoon. “I can’t wait.”

In that case, it might be a good time to chase a bonus.

“I get a bonus, I might have to go for two weeks.”