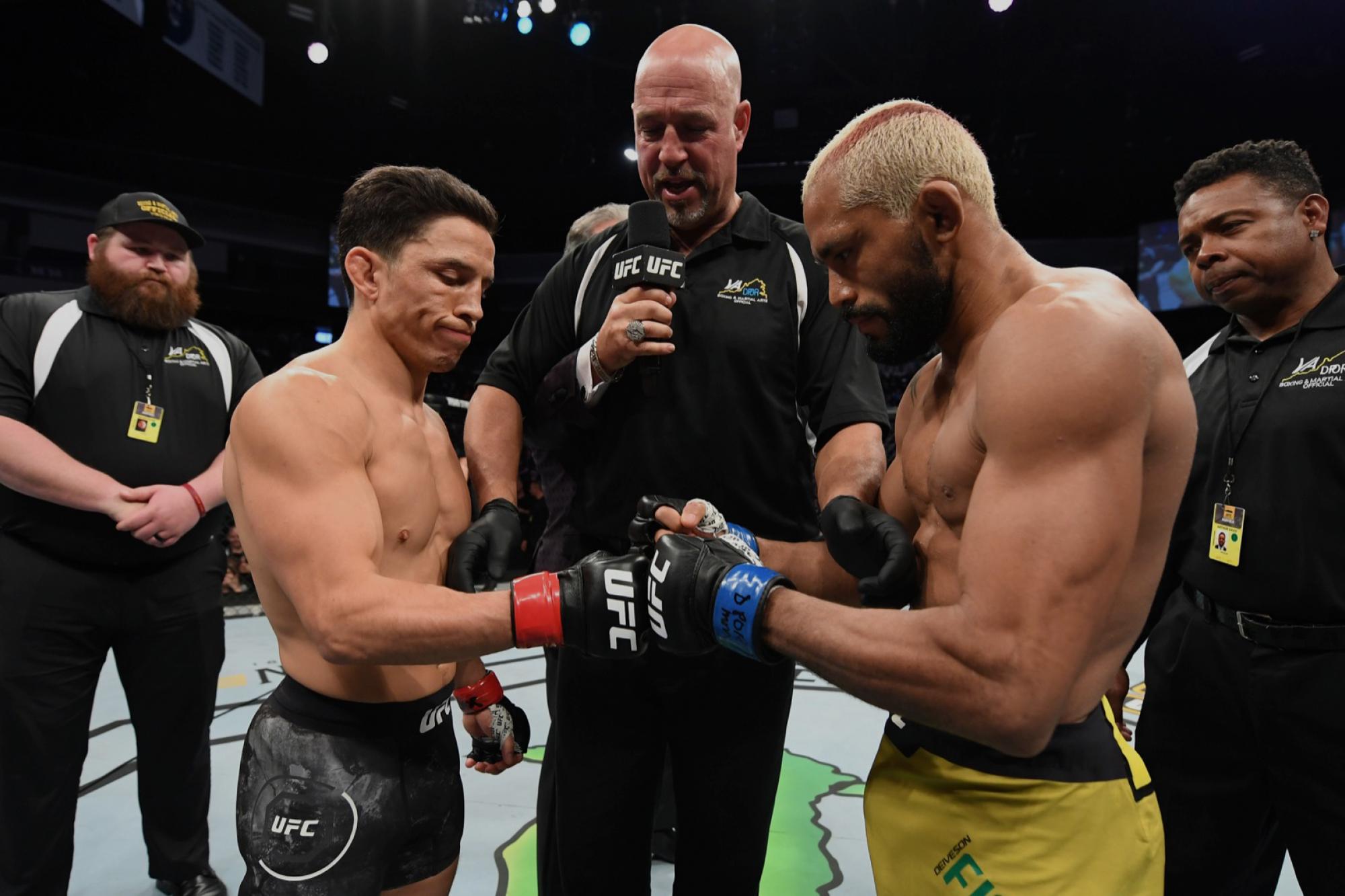 There was plenty of confidence coming from heavyweight debutant Carlos Felipe in the opener, but after three rounds, it was Moldova’s Serghei Spivac leaving the Octagon with the victory via majority decision.

Felipe did plenty of headshaking and motioning to Spivac in the first round, but little in the way of significant scoring, as it was Spivac jabbing effectively and throwing in the occasional right hand and knee. The Brazilian got down to business in the second and it was a close one, but not to Felipe, who appeared to tell Spivac after the frame that he won the round. Spivac was unbothered by the gamesmanship of his foe, as he scored a takedown early in the final frame and let go with point-scoring ground strikes. Midway through the round, Felipe made it back to his feet but was dumped to the mat and mounted moments later. The strikes kept coming from Spivac, making it evident that he had not only taken the round, but the fight.

Though known for their grappling, Tsarukyan and Ramos drilled each other with hard strikes in the early going, Tsarukyan holding an edge thanks to his speed and variety. Just before the midway point of the first round, the fight went to the mat, Ramos comfortable working off his back as Tsarukyan threw punches from the top position. With 40 seconds left, Tsarukyan let his foe up, and they remained standing to the horn.

Ramos upped his level of aggression in the second and got some hard shots in, but Tsarukyan stayed cool under pressure kept his own strikes coming, and even scored a brief takedown of the Brazilian in a good action round.

Tsarukyan fought smart and effectively in the third, refusing to get into a firefight with Ramos but still finding a way to bloody his foe, score a flash knockdown and land several more slick punches and kicks as the Brazilian tried to goad him into a brawl. Ramos pulled guard in an attempt to lock in a guillotine choke in the final minute, but it was to no avail, as the bout belonged to Tsarukyan.

Octagon newcomers Amir Albazi and Malcolm Gordon met in a bantamweight bout, and it was Albazi emerging victorious via first-round submission.

Two minutes in, Albazi got the fight to the mat, and with a little over a minute left, he got into the mount position. After taking some strikes to the head, Gordon gave up his back but scrambled into the top position. The problem was, he went right into a triangle choke by Albazi, who forced the tap out at 4:42 of round one.

In a competitive three-rounder between bantamweight up and comers, Brett Johns outscored Montel Jackson via unanimous decision.

Johns’ game plan was clear from the start as he locked up with Jackson and looked to take the fight to the mat. He succeeded twice, but Jackson got up quickly and then scored a flash knockdown with a little over a minute left. Johns nearly locked up an arm in the subsequent ground spell, but Jackson pulled free easily.

Going right back to his grappling game, Johns finally got Jackson down for an extended spell with a little under two minutes left in round two and he took his foe’s back. Jackson turned into a triangle choke briefly, but the Milwaukee native got loose and got in a couple strikes before the horn sounded.

Two minutes in, Johns scored another takedown and it was Jackson getting back to his feet and landing a hard knee as the Welshman put the fight back on the mat. With a little over two minutes left, Jackson was upright and looking to strike. Johns wasn’t interested as he went back to controlling the grappling portion of the fight, nearly locking in a guillotine choke in the final minute.

Spanish lightweight prospect Joel Alvarez made it two straight in the Octagon, as he submitted Irish veteran Joe Duffy in the first round.

Both fighters went after the legs with their kicks in the first two minutes with great success, but 15 seconds later, Duffy decided to switch things up with a takedown. That proved to be his downfall, as Alvarez latched on a guillotine choke as the fight hit the mat, forcing Duffy to tap out at 2:25 of the opening round.

With the win, Alvarez improves to 17-2. Duffy, who announced his retirement from MMA competition after the bout, falls to 16-5.

In a bout waged at a catchweight of 150 pounds, Grant Dawson continued to roll, winning a dominant three-round unanimous decision over Nad Narimani.

After going after Narimani’s calf with kicks to open the bout, Dawson fired off a flying knee and then took the fight to the mat a minute in. Dawson pressured his foe there as he attempted to improve position, and he kept Narimani grounded until the horn sounded.

The flying kick made another appearance early in round two, but Narimani brushed it off and kept working on his own striking attack. Dawson’s confidence was high, though, and he succeeded in taking the fight to the canvas again. This time, Dawson nearly locked in a rear naked choke on his bloodied foe, but Narimani hung tough and made it to the end of the round.

Dawson put his striking on display in the third as Narimani continued to show his grit, but the Bristol product wasn’t able to turn things around against the rising featherweight star.

The early stages of the bout were slow in terms of sustained action, at least until Dolidze unleashed a left high kick, and when the knee caught Ibragimov flush, a couple ground strikes later, the fight was over, with referee Herb Dean stepping in at 4:15 of the opening frame.

With the win, Georgia’s Dolidze moves to 7-0. Russia’s Ibragimov falls to 8-3.

Pantoja tried to end the fight early with a guillotine choke seconds in, and even off his back he tried to lock in a submission several times, but Askarov was ultimately able to find daylight in the second minute and the two were soon back on their feet. The grappling sequences continued, Askarov seeking a takedown as he pinned Pantoja to the fence. But it was Pantoja smoothly taking his foe’s back with under two minutes left, and he stayed there for the rest of the round.

In the second, Askarov kept the pace high on the feet and in the grappling exchanges, and as the round progressed, Pantoja began to tire, even though he found his second wind late in the frame and was able to finish strong thanks to his solid work in the scrambles.

Askarov began tagging Pantoja a bit more in the third, but as the two settled into the final five minutes, the action evened up again, both hoping for the shot that would allow one of them to surge ahead, and while it didn’t come, there were no fans disappointed by the high level action when it was all over.

Brazilian flyweight prospects Ariane Lipski and Luana Carolina were both known for their standup game, but it was Lipski taking the victory via first-round submission, marking the first UFC finish for the “Queen of Violence.”

Lipski scored a knockdown in the first 30 seconds of the fight, putting the ensuing action on the canvas. Carolina looked to lock up a leg, but Lipski calmly worked for a kneebar and she got it, producing a tap out at the 1:28 mark of round one

Lightweights Rafael Fiziev and Marc Diakiese delivered heavyweight striking throughout their bout, with Fiziev ultimately coming out on top via unanimous decision in an exciting three-rounder.

Fiziev bloodied Diakiese and landed the harder shots in the first round, prompting the Brit to try and take his chances on the mat, but the lasting memory was the array of body kicks Fiziev landed. Fiziev got even more aggressive in the second, and each strike landed sounded like it hurt, as he threw with fight-ending intentions as he dodged incoming fire from Diakiese, who began to find his range late in the frame. Fiziev stuck to the plan in the third round as he battered his opponent’s body, but Diakiese didn’t back down, landing some hard right hands down the stretch of a punishing fight.

The assumption heading into the Fight Island 2 co-main event was that Kelvin Gastelum was on point mentally and physically to snap a two-fight losing streak, but fellow middleweight contender Jack Hermansson put an emphatic end to the Arizonan’s plans, submitting him in the first round.

Hermansson was on his way to an early takedown, but Gastelum reversed the move, apparently putting himself in control. Hermansson had other ideas, and within seconds he locked in the heel hook that ended the fight at 1:18 of the opening stanza.

A new UFC flyweight champion was crowned Saturday night on Fight Island, as Deiveson Figueiredo scored his second consecutive finish of Joseph Benavidez, and this time there was no controversy, as the Brazilian scored three knockdowns of the perennial contender before submitting him in the first round.

The bout was a rematch of a February bout won by Figueiredo, but he was ineligible to win the title vacated by Henry Cejudo because he didn’t make weight. Add in controversy surrounding Figueiredo’s second-round stoppage win due to an earlier clash of heads, and a rematch was a natural. But while the first bout was competitive, this one was a devastating display of power by “Deus da Guerra.”

After a brief feeling out process, Figueriedo drilled Benavidez with a right hand that put the New Mexico native on the canvas. It looked like the fight was over, but Benavidez weathered the storm and got out of a number of rear naked choke attempts from the Brazilian. Midway through the round, Benavidez got off the mat and went back to work, his head apparently clear. With 90 seconds left, Benavidez was knocked down a second time but he bounced back to his feet, ready to jump back into the fray. But after a third knockdown, Figueiredo would not be denied, and this time, the rear naked choke ended the fight, with the official time of referee Marc Goddard’s stoppage 4:48 of round one. 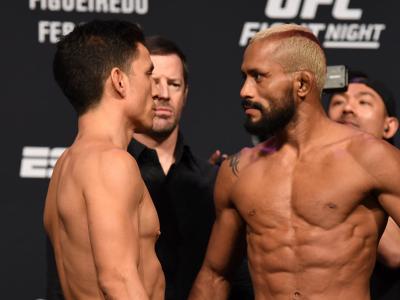