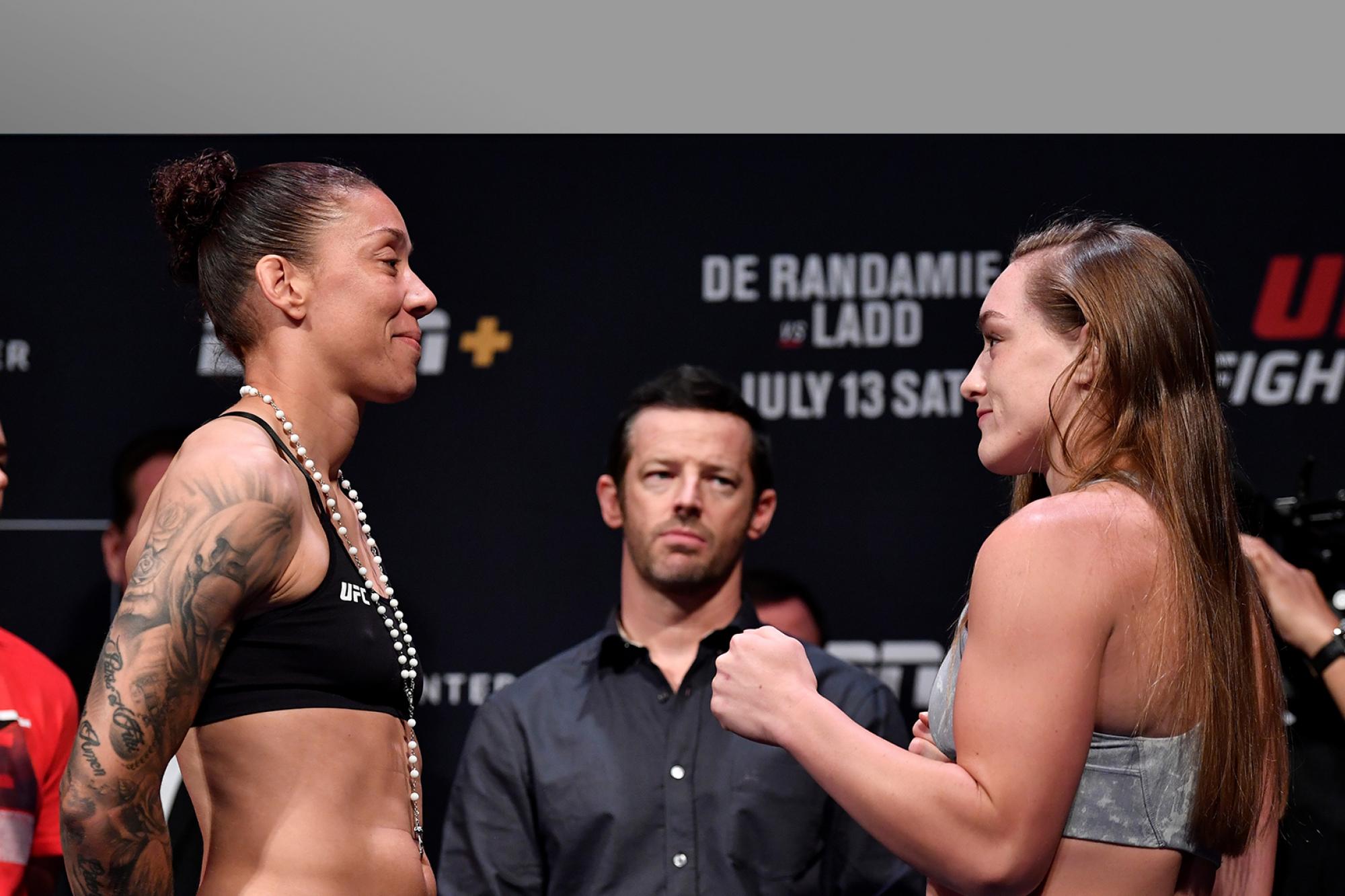 Follow all the action from UFC Sacramento
By Thomas Gerbasi • Jul. 12, 2019

It was a close one in the opener, with Sacramento’s own Benito Lopez outpointing fellow bantamweight up and comer Vince Morales via unanimous decision.

Lopez went after Morales’ legs in the early going, having great success as he marked up his foe. With a minute left, though, Morales struck back with a right hand that dropped Lopez. Lopez recovered well and got back to his feet, but it was Morales’ knockdown that left the lasting impression.

Avoiding any significant danger in the second round, Lopez got back to his busy attack, but Morales was matching him each step of the way. And while, the third remained as close as the previous two frames, Morales put his foot on the gas again several times, jarring the “Golden Boy” with hard punches in the process.

Van Buren lived up to her nickname throughout much of the opening round, as she bulled Souza into the fence and kept her there for long stretches. Souza did get a late takedown, but it likely wasn’t enough to swing the round to her favor.

Letting her hands and feet go in the second, Van Buren rattled Souza with her strikes, and though the Brazilian took the blows well, she was digging a hole for herself on the scorecards.

Souza got a much needed takedown in the second minute of the final round, but it was Van Buren using a submission attempt from the bottom to get back to her feet and score her own takedown. They didn’t stay on the ground long, and once upright, it was another takedown for the Gilroy product just before the horn.

Jonathan Martinez put an explosive end to a tactical meeting of bantamweights, knocking out China’s Liu Pingyuan in the third round.

After a fairly uneventful opening, a fight broke out just before the final minute of the first round, as Liu rattled Martinez with some punches before Martinez returned the favor with a knee and some kicks. That burst of action didn’t carry over into the second stanza, as the two largely circled each other for five minutes. But after a talking to from his corner between rounds, Martinez came out fast for the third, and Liu followed suit, and though the fight soon settled back into its previous rhythm, suddenly Martinez with a flush left knee to the draw that floored Liu and effectively put an end to the fight, with referee Josh Rosenthal stepping in at 3:54 of the final round.

It went three full rounds, but Ryan Hall delivered one of his most impressive efforts to date as he shut down longtime featherweight contender Darren Elkins via unanimous decision.

Hall’s game plan was simple” land a kick and then to to the mat, and for the most part, Elkins (25-8) was able to stay out of Hall’s wheelhouse. But with a little over a minute left, Hall (8-1) dropped Elkins hard to the mat with a kick and it looked like the fight was over as “The Wizard” locked up a guillotine choke. But this is Darren Elkins, and “The Damage” got loose. Later he got rocked by another kick, but this time he stayed out of serious trouble and made it to the end of the round.

Hall continued to impress with an accurate striking game that delivered a couple more knockdowns, and when you consider the danger the Virginian presented on the mat, he was piling up points while Elkins was hesitant to implement his usual aggressive attack.

There was no daylight for Elkins in the third, either, as he just wasn’t able to slow down or catch Hall, leaving him to drop the final verdict by scores of 29-28 twice and 30-27.

Longtime bantamweight contender Julianna Pena was back in the Octagon for the first time since January 2017, and the new mom made it a victorious return, as she won a unanimous decision over former flyweight champion Nicco Montano

After battling out in the clinch in the early going, the fight went to the mat midway through the first round with Montano landing on top. There was an armbar attempt by Pena with a minute left, but other than that, Montano controlled the action on the ground.

Montano continued to work to her strength – literally – in the second, as she was overpowering Pena at close range, but once Pena was able to take the dominant position on the mat in the second minute, she used strikes and positioning to even things up heading into the final round.

Pena scored the takedown a minute into the third stanza, but with a little less than two minutes left, Montana got to her feet and then got her own takedown. Pena, her left eye rapidly closing, rose quickly and let loose some strikes in an attempt to deliver a strong finish. And while Montano got a late takedown, the fight went to Pena via scores of 29-28 twice and 29-27.

Featherweight standout Andre Fili picked up his first finish since 2015 and he did it in front of his hometown fans in Sacramento, as he knocked out Sheymon Moraes in the first round.

Both fighters took turns letting their shots go early, but the call and response pattern ended when Fili rocked Moraes with a right hand followed by a kick to the head. Moraes stayed upright and tried to respond, but moments later a right hand put the Brazilian on the deck and the follow-up strikes from Fili brought in referee Jason Herzog to halt the fight at 3:07 of round one.

Stepping in on short notice for the injured Gian Villante, Contender Series Brazil alum John Allan made his UFC debut a successful one as he decisioned Mike Rodriguez over three rounds in their light heavyweight bout.

Rodriguez started out strong, using his reach advantage with kicks from long range. But soon Allan got warmed up and began landing the crisper blows in exchanges, and he then followed up with a takedown midway through the frame. Rodriguez eluded a subsequent guillotine choke attempt and rose to his feet, but Allan now had momentum on his side.

Shortening up his punches and sending them down the middle, Rodriguez scored well early in the second round before getting taken down again two minutes in. Rodriguez got up fairly quickly, but he ate a couple knees in the clinch before going to the mat again. This time, Rodriguez landed on top, allowing him to work some ground strikes. Allan stayed busy from the bottom, as well, and he nearly locked in an armbar before the two stood. Allan sought another submission, jumping guard as he locked up a guillotine choke, but Rodriguez easily slipped free.

A low knee by Rodriguez brought a halt to the action early in the final round, but Allan recovered and put the New Englander back on the canvas midway through. The two rose, but Allan was still pressing the action, landing some hard shots before another takedown that cemented an impressive debut for the Curitiba product.

Middleweight up and comer Marvin Vettori returned to the winner’s circle with a shutout three-round unanimous decision over Cezar Ferreira.

An inadvertent eye poke by Ferreira interrupted the action early and drew a hard warning from referee Herb Dean, and once the fight resumed, both fighters let their hands go, Vettori a little more freely. Ferreira got his shots in, but Vettori was the one moving forward, and that led to the Italian scoring a takedown and bloodying Ferreira before the end of the round.

Vettori scored another takedown in the early going of round two, and while Ferreira rose quickly, the blood was flowing again and Vettori wasn’t slowing down, as he kept the pace high for all three frames against the gutsy Ferreira, winning the decision via identical scores of 30-27.

Late replacement Wellington Turman impressed in his UFC debut, but it was Karl Roberson emerging with the hard-fought split decision win in middleweight action.

The middleweights wasted no time getting acquainted with each other as they got into some heated exchanges before Turman scored the takedown a minute in. In an ensuing scramble Turman took his foe’s back, but Roberson got out of trouble and into the Brazilian’s guard. Turman responded with an armbar, only to see Roberson slam his way free and stay in the top position for the rest of the frame.

Turman was able to implement his grappling attack for a large stretch of round two, but again, the resilient Roberson found a way to get out of trouble and into his opponent’s guard. In the third, though, it was more of the same for the New Jersey product, who was swarmed by the Brazilian Jiu-Jitsu brown belt and nearly submitted before he got loose and landed some hard strikes before the final horn.

The knockouts keep coming for featherweight contender Josh Emmett, who thrilled his hometown fans in Sacramento with a first-round finish of Mirsad Bektic.

It was no surprise that the two evenly matched 145-pounders fought on even terms through much of the opening round, but with a little over a minute left, Emmett put Bektic on the canvas with a stiff jab, and while the Bosnia native did his best to recover, the local hero kept the heat on until referee Jason Herzog stopped the fight. The official time of the finish was 4:25 of round one.

Life apparently begins at 40 for “The California Kid,” as UFC Hall of Famer Urijah Faber needed just 46 seconds to knock out bantamweight contender Ricky Simon in his first fight since retiring in 2016, igniting his hometown crown at Sacramento’s Golden 1 Center in the process.

The knockout was Faber’s first since he defeated Joe Pearson in defense of his WEC title in 2007.

Less than a minute in, Faber landed a thudding right hand on the side of Simon’s head that sent the Washington product crashing to the canvas. Faber rushed in for the finish and he got it, landing a series of unanswered blows that brought in referee Mike Beltran to stop the fight.

Sacramento may not have been happy with the stoppage in the UFC Fight Night main event, but top bantamweight contender Germaine de Randamie will take it, as she handed El Dorado Hills’ Aspen Ladd her first pro loss via first-round TKO.

“He did what he thought was best,” said Ladd, who was all class after the stoppage, which didn’t sit well with the crowd at Golden 1 Center.

One of the best kickboxers ever, the Netherlands’ de Randamie isn’t someone to be played with on the feet, and the “Iron Lady” proved it when she landed a flush right hand that dropped Ladd to her knees. Ladd appeared to be frozen for a split-second as de Randamie moved in for the finish, and while a follow-up shot didn’t land flush, referee Herb Dean had seen enough, stopping the fight at the 16-second mark of round one.