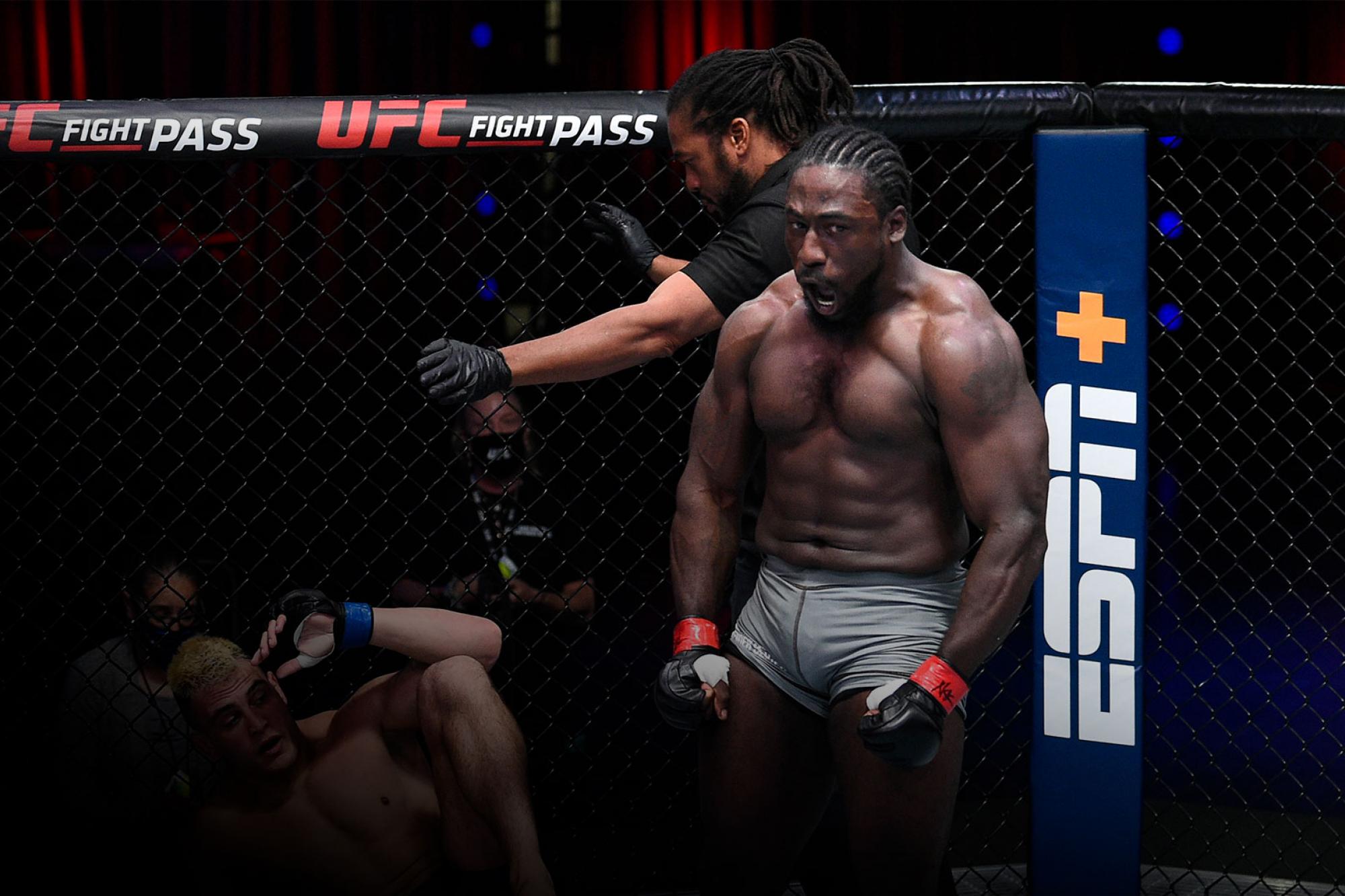 William Knight prepares to enter the Octagon more the second time when he takes on Aleksa Camur at UFC 253
By Thomas Gerbasi, on Twitter: @TGerbasi • Sep. 23, 2020

With a UFC contract on the line earlier this month, William Knight threw every elbow and punch with the intention that one of them would change his life. At 2:23 of the first round, referee Herb Dean pulled him off Cody Brundage.

“That's my world,” he said. “When those doors close and the ref says fight, I go into this zone of dismantling a human being. Then I come back to my senses and show them respect.”

Knight, 32, needs that 15 minutes or less so much that just four years after he put on the gloves for the first time, he’s in the UFC, preparing to make his Octagon debut this Saturday against fellow Dana White’s Contender Series graduate Aleksa Camur.

“I'm four years into mixed martial arts and two years as a professional and I'm on the biggest stage that you can speak of,” he said proudly, well aware that finding the sport may have saved his life after years of abuse and bullying brought him to nearly 300 pounds as he tried to find his way in a life that was far from typical.

Now, he lives an atypical life, complete with worldwide fame, a growing fanbase and a 14-hour flight to Abu Dhabi for this weekend’s fight. He’s on Fight Island now, but in the days leading up to his trip, he wasn’t exactly thrilled about that flight or any other, for that matter.

“Yeah, that's one thing I am not looking forward to,” he said. “I hate being on a plane. I don't care if it's two hours or 20 minutes, I just don't like plane rides.”

How To Order UFC 253 In Your Country

Yet when asked if he’s sought out advice for life in the friendly skies, he quickly makes the point that some discomfort getting to a fight is nothing compared to where he’s been.

“I don't sit there and look for a chip on my shoulder; I already walk around with one from my personal life,” he said. “If you understand where I come from as a child, a plane ride is nothing. Imagine before my grandmother, who took me in after finding out what was going on, imagine being abused every day from your drunk stepfather after coming from school and you did absolutely nothing. You think a plane ride is really gonna scare me or bother me? I just don't like it. You sit here and have to deal with this savage of a human being compared to a little kid. Every day. It's not here and there. It's every day, where you would pick up afterschool programs just so you don't have to go home because the sooner you go home the worse it gets. The bigger fight is life. That's the ultimate battle. Going on a plane, getting on the bus, going to go fight in a cage, cutting weight - all that stuff to me is the easy part. The survival in the beginning is where my story comes from.” 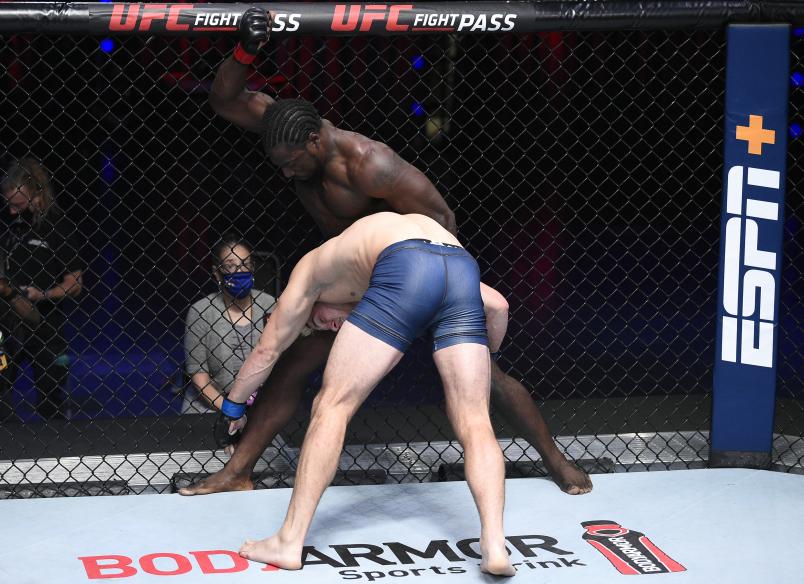 Learning to survive is at the core of Knight’s being. Yes, there was peace in his grandmother’s home, but in between there was the abuse at the hands of his stepfather and in foster homes and bullying in the place where he was supposed to feel safe.

These days, Knight has dealt with those demons, at least in his mind, and he keeps his guard up and that chip firmly on his shoulder, though he is one of the most affable fighters you’ll run into as long as you don’t have gloves on and a mouthpiece in. He talks about seeing his stepfather again, a meeting that wouldn’t be pleasant, but cathartic.

“I want to encounter this human being for him to give me a reason to why he did what he did,” Knight said. “And if that's not the case, then let's lace up and give me my rounds. Let's go. I'm here now. I'm that same little kid, I'm just older now and I'm wiser and I understand how to fight back. Just give me my rounds and then you go about your business.”

I remind him that as a fighter at the elite level of the sport, he doesn’t need to do that. But not having been in his shoes, I have no clue about what he’s feeling. The hurt is obviously still there, and who could blame him? He brings up the other bullies in his life, some of whom have had the gall to reach out to him since he started making a name for himself as a prizefighter, quick to tell him to “not forget the little people.”

“All these other people are phonies,” Knight said. “They put me through some s**t as a child to where I thought of eliminating myself from the existence of Earth or I thought of revenge and going back to the school and getting these people. They don't understand the mental state that you put somebody in. I was already dealing with it at home and then the safe haven I thought I had, I had to deal with you guys. People don't understand. Things that traumatize you, you will always remember. I know every bully by their first and last name. I'm 32 and I know them by their first and last name.”

Some were there for him, though. Knight credits counselors, teachers and school officers back in his home state of Connecticut with listening to him and having an open door. Wrestling in high school helped as well, but when those days were over, Knight lost his way until he decided he had enough at the end of 2015.

In his UFC bio, Knight said he began training “because I was lazy and not doing anything.”

Soon, he was doing something, like making a name for himself on the amateur MMA scene in New England. By 2018, he had turned pro, and he’s never looked back. On season three of the Contender Series, he earned a developmental deal with the promotion, and earlier this month, he stamped his ticket to the big show with the win over Brundage. By the time his plane landed back home, he had another fight.

“I'm built for this, man,” he laughs. “I come from a wrestling background. We wrestled four, five times in one day. So let's go. Fighting is the same thing. I finish the guy in the first round, I'm feeling good, I'm feeling nice, I can make an easy cut, weigh-in, then let's scrap.”

And while fighting is his outlet, his past hasn’t made him bitter. It’s only made him want to help those in need and in the same situation he was in. He talks about taking out $200 in singles each month and driving around the neighborhood, giving money to folks who need it, and when it comes to the kids, he wants them to know there’s a way out. Just keep fighting.

“That's my sense of giving back,” said Knight. “I feel like I'm doing something good, helping these people, talking to kids, letting them know to have a voice. Because I was afraid. When I was molested in foster care, I was afraid to speak on it. I truly believed no one would believe me. I see all these stories and they're so sad it makes me want to cry because I could have been one of those kids that were molested and they killed themselves or they went missing or they'll never be the same. That could have been me.”

It’s not. William Knight made it. Now it’s his turn to open the door for those behind him while smashing down the ones in front of him.

“Fighting is my outlet,” he said. “All this anger I had stored up for years, that's my outlet. That's my adrenalin rush, that's my high. People use drugs; fighting is my drug. I go in there, get my hit and I'm done. I'm relieved, I feel good. Then a couple hours later I tell my coach we need to do another fight. But my ultimate goal is to impact others and show them there's another way. There are other things in life than the pain and suffering we're going through now. I understand that we shouldn't go through it and it's not fair, but trust me, you can survive that fight and you dig deep in yourself and continue to stay positive, I guarantee you there are greater things to come.”